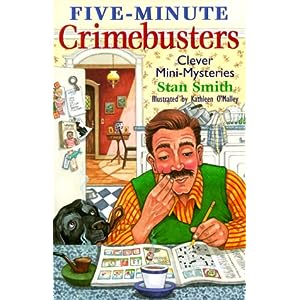 Thomas P. Stanwick, amateur logician is friends with Investigator Matt Walker. Matt Walker comes upon everything in the crime world. Theft, murder, you name it. Stanwick often comes along to the crime scene or takes in the verbal account from Matt Walker so he can try to solve them for and with Matt. He always can decipher the problem that is in store so why don’t you try along with him. Read these awesome riddles and you won’t be able to shut off the light at bedtime! Five-Minute Crimebusters: Clever Mini-Mysteries by Stan Smith is an excellent book that you have to think about to get the answer. I would recommend this book to anyone!

Here is another book, Five-Minute Mini-Mysteries that has the same kind of theme to it and by the same author but I have not read it. Drop us a comment if you have! George Kranky lives with his Mother, Father and Grandmother on a farm. When George is alone in the house with his Grandmother, she is rude and mean to him. She tells him that if he is selfish, he will shrink and if he wants to grow, he  has to eat some cabbage!! Ugh!!  She is the most selfish person George knows, so he thinks that she should get a taste of her new medicine. You see, his Grandmother has to take her medicine periodically, so why not make a new one for her. So George follows no specific recipe, just adds a little bit of this and a little bit of that, some toothpaste and some antifreeze and violá! Her new medicine is born! Read this book and see the spectacular affect that it causes.

***Notice that “Marvelous” is spelled differently on both covers. The alternate spelling is “Marvellous”. Maybe this is because that is the version from the UK. Maybe.

Click HERE for the Official Roald Dahl website where you can find games, lots of stuff about Roald Dahl and much more!

Watch and hear a clip from the audiobook version of George’s Marvelous Medicine:

Click HERE for RoaldDahlFans.com which has everything, if not more than the Official Roald Dahl Site. It even includes stuff for teachers!

The Son of Neptune

fantasy  – 513 pages  Seems right for middle school and beyond fantasy readers.  You won’t be disappointed.

I finished The Son of Neptune and was immediately anxious for more.  That is one problem with reading a series as it is released – waiting, wishing and wondering.   I like how these books have me wanting to know more – both about the story and about myths from around the world.

In this book three demigods – Percy Jackson, Hazel Levesque and Frank Zhang join forces, first to defeat Alcyoneus and free Thanotos, and then to defeat Polybotes and the other forces aligned with Gaea.  Gaea wants to overthrow all of the gods and have ultimate control of everything on earth.  Hazel and Frank are Romans connected Camp Juno.  They need Percy – but believe he may be a spy because all Romans know Greeks can’t be trusted.  Throughout the quest, pieces of Percy’s past come into the story and more and more the characters realize mythologies from around the world share common elements.  After all there is only one Earth whether called Gaea or Terra.

Through unique twists and turns in the story the past and present are joined, souls escape the underworld and the fate of our world rests upon the fulfillment of the Prophecy of Seven.  Just as the book ends, Festus and Leo and Tyson play a small part in the story connecting this book to The Lost Hero.  We have met six of the demigods by the end of this story.  Who will be the last?

We have a while to wait until The Mark of Athena is released in 2012.  I am hoping the title is a hint as to who the seventh demigod will be.  While I am waiting to read I think I’ll find out more about the Argonauts, the Titans and the Giants.  I am curious to learn more about the mythologies of the world in order to understand more of the links and connections that Rick Riordan creates in the Heroes of Olympus series.