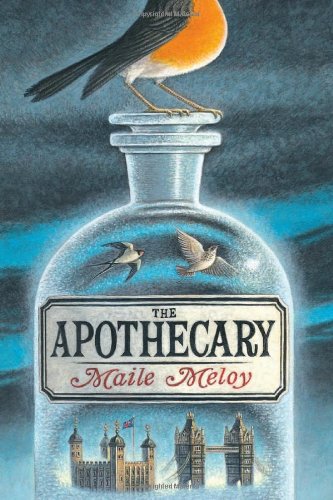 by Maile Melloy  368 pages of  adventure based fantasy and historical fiction mixed together is an exciting read from the start… would you fly if you had to?

The year is 1952 – the United States and the Soviet Union are in an arms race – who can have the most nuclear weapons to use as a threat.  The United States is afraid of Communism.  The Soviet Union is afraid of Democracy.  Each thinks they are correct and no one is talking.  Everyone is afraid that “the bad guy” is going to take over the world.  The message is “BE PREPARED!”  At least that is how I remember it when I was growing up.  I wasn’t around in 1952, but in 1968 that was how I understood the time  Janie lived through.  Lots of worry and blame.

In 1952 when The Apothecary takes place, Janie Scott, 14, lives in L.A. She wears her Katherine Hepburn slacks to school and feels as though she is on top of the world.  She is until her screenwriter parents get blacklisted in the Communist scare.  Though completely innocent they are forced to move to London to avoid jail. Janie feels very much the outsider at St. Beden’s until she meets Benjamin Burrows, whose father is the local apothecary. Ben doesn’t want to follow in his father’s footsteps; he thinks being an apothecary is all about dispensing aspirins and salves for rashes. He wants to be a spy and he enlists Janie to help him follow Leonid Shiskin, one of their teachers.  Through their teamwork they learn he works for the Soviet embassy, and to their astonishment, discover the passing of a secret message to Ben’s dad. Soon afterwards, his dad disappears, but not before entrusting to Ben and Janie an ancient book called the Pharmacopoeia containing secret recipes for magic herbal elixirs.

In no time at all the teens are chasing and being chased by Russians, Germans, double agents, and chemists.  They learn that the art of  an apothecary is not nearly as mundane or sedate as Ben had assumed. To save the world Ben and Janie learn about atomic weapons and containment theory. The story is a skillfully woven mix of the spies, suspense, assasins, romance, evil genius, sinsiter bad guys and resourceful teenagers.  You’ll learn about the attitudes that prevailed toward the Communists and their sympathizers after World War II. It’s interesting to think about this time in our history as it develops in the heat of the chase on land, on sea and in the air through The Apothecary.

If you’re not sure yet if this book is for you (and I think it is if you have read this far) check out this book  trailer  .  It might be the final hook in – Read it and enjoy!