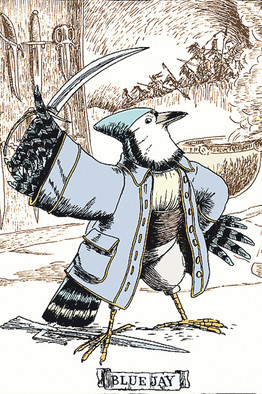 This book is fun for bird and pirate lovers alike!  Blue Jay, feared captain of the Grosbeak, was said to be the most fearsome and bloodthirsty pirate of the skies.  Those who saw the Jolly Robin flying from the mast offered little resistance and so Blue Jay’s gruesome reputation as a ruthless pirate grew and grew.  The crew, though pirate to be sure – in a ship faster than most of the merchant vessels sailing though the Thrushian skies – knew Blue Jay to be a fair, just captain, thoughtful and a stalwart optimist.

One habit that set Blue Jay apart was his fascination with eggs – not as food but as treasure.  “The trouble with eggs,” Jay would often joke to is adopted offspring, now part of the Grosbeak’s crew, “is that they sometimes grow legs!”  That statepment is rather prophetic as the adventure told of The High-Skies Adventures of Blue Jay the Pirate begins with the finding of one very rare egg indeed.  A large oval beauty, plain, though with a certain elegant majesty. Brought onboard and stored with the other specimen in the Egg Gallery, the egg causes Junco, the chief navigator to behave oddly which precipitates an unusual meeting with the sparrows of  Briarloch which in turn leads to a confrontation with Teach, head of the murderous mod of crows plaguing and terrorizing the land.

A string of bad luck leaves the Grosbeak shipwrecked, many of the crew lost or wounded and the survivors left for dead with the flight feathers clipped on the forest floor – all seems lost, but Blue Jay – the eternal optimist and endless schemer will find a way out of the dilemma…if only there is enough time and a good wind for sailing.  Read The High-Skies Adventures of Blue Jay the Pirate to see how the wind blows and who ultimately prevails – it won’t be all you expect.

I am hoping more adventures will come along.  I would like to know what happens to Henry and Gabriel and Hillary.  What about Poppa and what of Briarloch?  What do you think?