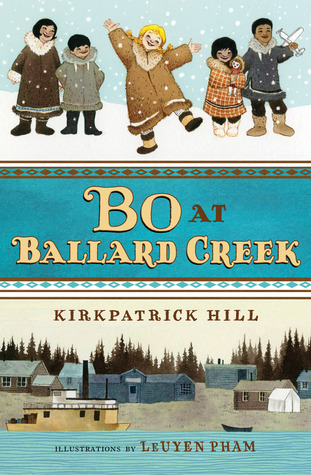 278 pages of small town adventures for intermediate readers – it would make a fun read aloud for younger readers too.

Jack Jackson and Avrid Ivorsen had arrived in Alaska in 1897 Klondike Gold Rush.  They were both big men – bigger than most and that’s how they met each other.  They helped each other get the large sized clothes they needed.  Once they met, they figured out they were good help for each other – Jack ran the kitchen and Arvid did the blacksmithing for the mine.   They were good company.

One day Arvid was taking a break, standing on the riverbank watching the commotion of the logs and passengers being loaded on a steamship when Mean Millie, one of the good-time girls, walked up him and handed him her baby. Told him to take it to the orphanage in Nulato next time he went to town and walked away.  Arvid had no idea of what to do with a baby, but Jack did.

When the time came to take that baby to the orphanage, Avrid and Jack just walked on by and that was how Bo came to live at Ballard Creek with her two Papas.  She worked in the kitchen with Jack helping out with all she could.  She cut the biscuits and filled the wood box with kindling.  When her chores were done, Bo went to find Oscar – the only other child not yet old enough for school and they’d go visiting.  Sometimes they’d read magazines at Milo’s Roadhouse, sometimes they’d visit Lilly and Yovela or sometimes they’d visit Nakuchluk and Unakserak, the oldest people in town.  Bo could speak English and Eskimo.  She was a friend to everyone and everyone at Ballard Creek looked out for her too.

It is interesting to learn about life at the turn of the century in Alaska.  Interesting to learn how the gold was mined, how the mail was delivered, how supplies were shipped and how traditional ways were married with new customs so that all in the village survived and prospered.

The About the Author blurb says, “Kirkpatrick Hill was born into a mining family:  her father was a miner as was her grandfather.  When she was little the family lived at Cleary Hill Mines near Fairbanks, Alaska – a place much like Ballard Creek.  She says, ‘I almost always write bout true events and my characters are often based on actual people.  I couldn’t make up anything more interesting than things that really happened.’  That means that Ms. Hill has known some wonderfully caring people and they have shared some amazing times together.  Reading Bo at Ballard Creek is a real treat!  I hope many readers will join Bo in her small town and meet all the her friends as well.