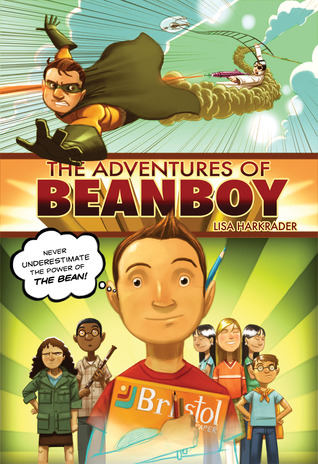 235 pages of everyday life with super hero connections.  What is your super power?  I bet you have one that you haven’t noticed yet.

Tucker MacBean is a seventh grader.  He has a passion for comic books . H2O man is his favorite super hero, but they’re all pretty cool in Tucker’s mind.  He has a best friend, Noah Spooner who is organized and driven to do his best in school.  He has a little brother, Beecher who is most often his main sidekick while his mom is trying to juggle single parenthood, a demanding job and a full load of night courses at the local college.  And, he may have an arch nemesis, Sam Zawicki, who seems angry at the world.  Though Tucker pretty much tries to stay out of her way, their paths keep crossing.

It might seem that Tucker MacBean is a typical kid at first, but the more you get to know him the more you admire is choices. He’s pretty extraordinary. Tucker’s mom is a phantom presence in his life – sticky notes and piles of clean laundry are often the only signs he has that she’s been home.  He doesn’t complain.  He just makes sure Beecher has what he needs.  That’s not always easy.  As Tucker puts it, “Something happened when Beecher was born.  He didn’t get enough oxygen in his brain right at first.  So he doesn’t do everything the way everyone else does.”  Tucker is resourceful.  When the opportunity arises, he decides he will enter a contest to earn a scholarship for his mom so she won’t have to work so hard.  He’s observant.  He notices how his classmates treat one another.  Maybe it is because he really does have a super power of invisibility that he is able to see so much and try to understand the other perspective.  He is honorable.  Tucker MacBean chooses to do what is right rather than what is popular most of the time – and that is hard!

The contest that Tucker has decided to enter says:  “H2O’s sidekick must possess the true heart of a hero.  Reach deep within yourself, find that heroic heart, and create a sidekick who can rank among the greatest sidekicks in comic book history.”  You’ll have to read The Adventures of Beanboy to find out how similar the powers of an ordinary seventh grader are to those of a super hero.  Maybe it’s the Clark Kent effect.