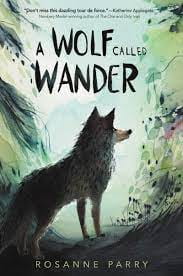 A Wolf Called Wander by Rosanne Parry is the story of Swift, a yearling wolf, who loves his life:  his den, his family, his pack, his valley.  Each day is full of challenge and wonder.  Swift has so much to learn, and he is excited to learn it all.  He admires his father.  He admires how his father and mother form a perfect team to ensure the pack’s safety and survival. Right from the start, Swift shows his interest in learning, determination and a kind heart.  He watches everything and remembers all he can.  Swift aspires to be as great a pack leader as his father.

One terrible day, too soon of course, Swift is separated from his home, his family and everything he knows by a rival pack.  Their attack claims his family’s territory – he hears that in his father’s final song and howl.  Too soon Swift finds himself alone, left to figure out how to survive. 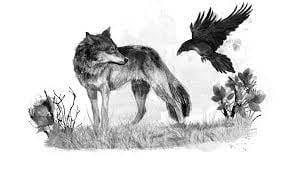 From that day on he begins a seemingly endless journey to find a new home and pack.  On his journey, Swift has to deal with many things he has never encountered before – black rivers (roads), spiked vines (barbed wire), and immature wolves who bring danger by acting in ways Swift’s father would never allow

Swift’s journey is full of danger, hunger, and desperate loneliness. The story was inspired by OR-7, a real wolf naturalists tracked in the wild.  Many facts inspire the twists and turns of Swift’s story.  I really liked the  symbiotic relationship Swift had with a scarred raven.  It made me glad that Swift was not totally alone.  It was even better to learn that ravens and wolves do actually work together for real.

A Wolf Called Wander is a wonder.  It is a great story – based on the life of a wolf who is alive today.  It is written from the perspective of a wolf so we can live right beside Swift in his joy, confusion, fear and sorrow.