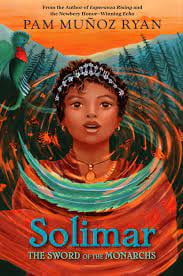 Solimar: The Sword of the Monarch by Pam Muñoz Ryan tour 15-year old heroine on a magical adventure to rescue her kingdom and save its sacred symbol.

The time for Solimar’s quinceañra and official coronation as princess is fast approaching.  She has mixed feelings about the changes and new responsibilities coming her way.  She loves her family.  She is proud of her heritage and holds deep respect for her elders.  She, as are all the citizens of San Gregorio, is a fierce protector of all the natural wonders around her.  Still she questions and wonders about how “new and different” might strengthen her kingdom rather than diminish it.

While waiting for her grandmother, Solimar slips quickly into the forest to witness a moment in the annual migration of the sacred butterflies.  Though her visit is brief, she is chosen by the monarchs to be their champion.  In return for her protection, Solimar receives a magical gift.  As she is learning how to use this new gift wisely, a neighboring king plots to kidnap her family and force the kingdom under his will.  Solimar, alone, has what it takes to rescue her family and save her kingdom if only she can follow signs with strength, courage and speed.

What a surprising and wonderful story!