184 pages of suspenseful whitewater adventure, fast paced and flowing with excitement for intermediate and middle readers

Dylan has packed his bag.  At fourteen he’s flying from to Asheville, North Carolina to Alpine, Texas and then taking a bus to Terlingua Ghost Town.  His long lost uncle and cousin live there. Dylan’s never met them before and he’s looking forward to his first chance.  His uncle leads wilderness adventure trips.  Dylan’s been to camp and learned about canoeing, rafting and white water, but this is his first trip out west to give some serious rapids a try.

After hours of grueling travel Dylan arrived at the hotel where he is supposed to meet his cousin and uncle.  They’re not there, but they’ve left a message to hitchhike 80 miles to meet at a ghost town restaurant.  Dylan has to decide:  call home and bring the trip to an end or take a chance – a big chance. He takes the chance.  Fortunately he arrives without harm but again the unexpected happens.  His uncle isn’t there.  He has suddenly been called away to Alaska.  His fifteen-year-old cousin Rio still wants to do a rafting trip.  Again Dylan has to decide:  call home and end he trip, let his mom and dad know no adult is around, or agree to a smaller canyon trip.  He agrees and sticks with his decision even after they are warned about Hurricane Dolly and even after they see suspicious Black Hawk helicopters flying up and down the river.

The first part of their trip is uneventful.  The water is calm and low.  The boys have fun getting to know each other. It kind of cool to know you know what to do in the wilderness.  It’s clear Rio has had a lot of experience, but Dylan can hold his own as well.  One night, while were setting up camp, two figures appear – man and seven-year-old boy.   Both of them are in bad shape.  The boy has red marks on his hands as if his wrists had been tied, his head is cut and his hands are scatter with cactus needles.  They claim one story, but Dylan and Rio don’t believe it is true.  They’d like to help, but something tells them to be wary.  They end up sharing some supplies and even give the strangers their tent before heading off along the river toward the Mexican border.

The predicted bad weather arrives.  Torrential rain comes, filling the river and turning their placid trip into a harrowing challenge for survival.  On top of that they come upon the strangers again.  The man is bad news – but the boy must be helped.   Only Dylan and Rio can help him, but how?  Dylan and Rio are engaged in a suspenseful struggle you’ll be racing to the end to see who comes off the river alive?  Take Me to the River is an exciting ride to the very end.  It’s full of details and description that make you want to raft the Big Bend River and explore the canyons – just not in a hurricane.  Read Take Me to the River.  You’ll be glad you did. 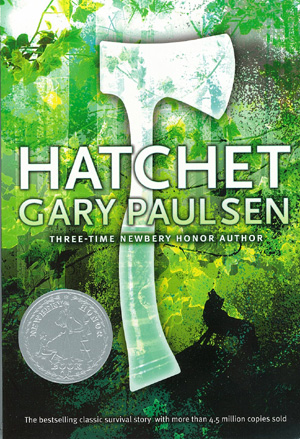 Brian Robeson is going to visit his father in Canada by being flown in a two-seater plane. But when the pilot has a heart attack, Brian is left to fly the plane, alone. Not knowing which way he is supposed to be going, he just keeps flying until,

“…between the seventeenth and eighteenth radio transmissions, without a warning, the engine coughed, roared violently for a second and died.”

After crash landing into a pond, Brian must survive in the Canadian wilderness with only a hatchet, a ripped windbreaker jacket and his own self courage and knowledge. Facing many challenges and obstacles, he will keep fighting. And with the dreadful secret about his mother tearing him apart, there may be more mental pain in the whole ordeal than physical. Read Hatchet by Gary Paulsen and you will agree; it is a timeless classic.

Buy this book from Amazon.com!

North America has split into 12 districts. When the number gets higher the poorer the district gets. A girl in district 12 named Katniss Everdeen is having a tough time getting food for her familiy, on top of her father dying, and having her mother in the house since the tragedy happened. But with her extreme skill in archery she manages to get by. The Hunger Games are approaching and the picking of the contestants is about to begin. The  hunger games is where one person from each district is choosen to compete in an arena in the capital where the contestants are to fight for their lives. The last one to live is the winner and gets to live in one of the Victor’s Mansions in their district. When the hunger games picks her sister, Primrose, Katniss takes her sisters place to be in the hunger games. Along with her teammate Peta Melark they head to the arena where Katniss uses her extreme archery skill to battle for her life.

A movie of The Hunger Games is coming out in March! 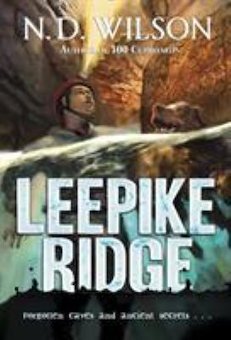 Eleven year old Thomas Hammond has always lived next to Leepike Ridge. His house is chained on top of the ridge for fear of it toppling off in high winds. One night, unable to sleep, Tom heads down to the stream that borders their (his mother and Tom) land. He discovers a large piece of refrigerator foam lying on the bank of the river. He tentatively steps on it with one foot, two feet, and miraculously it held Tom’s weight! What seems to be an aimless trip on the river, Tom falls asleep and then the aimless trip on the river turns into the deadly rapids that suck Tom into an underwater cavern. Read Leepike Ridge to find out what happens.