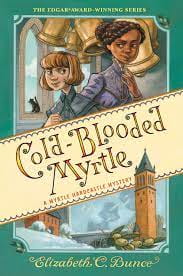 Myrtle Hardcastle— twelve-year-old amateur detective—is back in her third book.  This time she is solving a string of murders in her hometown of Swinburne.

On the morning of the annual Christmas reveal, with the whole town gathered outside the window, the proprietor of Leighton’s Mercantile is found dead.  Perhaps the poor man has had a stroke, but Myrtle suspects more.  The tableau has some alarming references, and seems connected to the long ago disappearance of a student named Olive Blackwell.

But who would want to kill the local dry-goods merchant? Perhaps someone who remembers the mysterious scandal that destroyed his career as a professor and archaeologist. Myrtle, along with her tutor, Miss Judson begin their investigation.  The more Myrtle looks, the more she discovers about her mother (who passed away from cancer when Myrtle was younger), a secret society, and a past wrongdoing.

Her investigation lead Myrtle through Swinburne.  She talks to Leah, the new carillonist, who shows her around the the tower and explains how the bells are played.   Leah will be holding the first concert of the bells since Olive’s mysterious disappearance. She invites Myrtle to come. Myrtle attends the opening of Leighton Museum and talks to the curator about the artifacts and scenes donated by Professor Leighton before his death.  She also talks to newspaper reporters who seems quite interested in the twists and turns of this particular mystery.  Myrtle observes and notices.  She wonders and questions.

When the killer strikes again, the figures in the Leighton tableau are rearranged foretelling the crime. Myrtle finds herself racing to uncover the long-buried facts of a cold case and the motivations of a modern murderer.

You’ll have a great time solving the case with Myrtle.  Sherlock Holmes has nothing on her.

PS – If you want to learn more about pneumatic subway systems, check this book out. 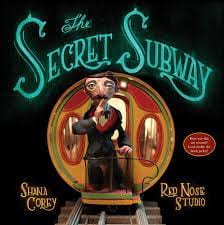