the second of the Dissenter’s trilogy

Will the Elementals take over the world?  Have they already?  Do those committed to saving Earth and our environment have a chance?  It’s hard to tell.  The Shimmers in the Night, centers on Jax and Cara as the new school year begins.  Jax has gone off to a institute for brilliant, unusual kids.  He is going to be working through some challenges and test with other children like him to find out what his full capabilities are.  He may stay there.  He may come home depending on what they discover.   Just as Hayley has put up with Cara’s unusual habits and tastes, Cara is trying to do the same for her.  That’s what friends are about after all.  They join the swim team, which means weekend meets, travel and  overnight stays.  Hayley can go as long as her mom chaperones and that means she and Cara will have some very close supervision.  (Hayley’s mom doesn’t trust anyone very much.)  Another friend, Jaye is on the team along with Max’s girlfriend, Zee – she different but okay in Cara’s book.  She nice to her and doesn’t treat her like a little kid and that’s cool.

Once the swim team get set in the hotel and learn the order of the races, Cara gets a text from Jax begging her to come and get him.  He says things in the institute are not right.  Everything is strange and he is uncomfortable and afraid.  Cara enlists the help of her friends to cover for her and she goes off to find Jax and bring him back. Right from the start everything goes wrong.  Fire is the element called to destroy Earth this time and Cara is confronted with Burners who create intense heat and fire.  They consume souls and hollow out their victims in their attempt to altered Earth’s environment so their live will be supported, but all other life will be consumed.   Through visions, shape-shifting and the incredible power of friendship Cara, Hayley, and Jaye are able to find Cara’s mom for a time and foil another part of plan to limit life on Earth.  Cara remains convinced that a world that is open to and healthy for all life is worth fighting for.

There are some great sequels and second books in series to be read.  Here’s my pile.  The Shimmers in the Night was first.  I’ll let you know what happens in the rest as I work my way through them.  So many amazing books to read! 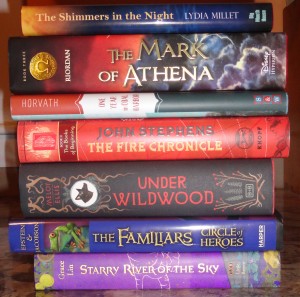