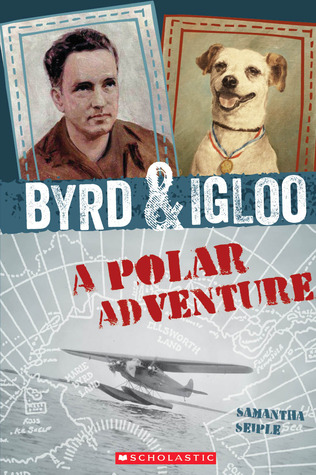 for intermediate readers and beyond

The story begins in January, 1926 on a pouring, bitterly cold day in Washington D.C.  Walking home from work, Maris Booth found a shivering puppy. She knew if she didn’t take him home he would die.  She snuck the puppy into her apartment and then into work.  She cared for him, but knew he couldn’t stay cooped up day after day.  The puppy was independent and determined just like, Maris realized, Robert Byrd.  She had read about Byrd and his daring goal to be the first person to fly over the North Pole.  Booth called Byrd and convinced him that this dog could go anywhere he could and would be a reliable companion on any trip.  Unsure at first, Byrd finally relented and thus began the five year friendship of a man and dog who traveled pole to pole together.

The puppy, soon named Igloo, was devoted to Byrd.  Igloo was left behind at the base and did not fly over the North Pole with Byrd on that first expedition – and he made sure that was the last time. Igloo went everywhere with Byrd.  He learned to deal with vicious sled dogs, wore a fur suit and booties to deal with the bitter cold of the Pole and was as dedicated to Byrd as Byrd was committed to the success and safety of each person in his crew.

Early aviation was exciting, dangerous and unknown.  Combined with the polar exploration and the growing science of the time, the true story told in Byrd & Igloo shares this interesting point in history.  The adventures of Igloo, a strong-willed, devoted, best friend, traveling along side the polar explorer from North Pole to South Pole, with Boston in between are exciting ones.  Igloo was quite a dog.  His adventures were many!

The book is illustrated with photographs of the expeditions to help readers picture that era.  Read it.  You’ll be glad you did