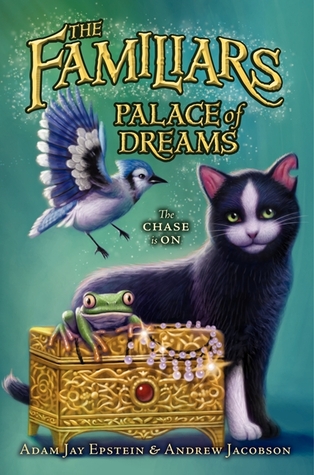 the 4th in The Familiars series

Peace has come to Vastia.  Now that Skylar, Gilbert and Aldwyn had defeated Paksahara, Queen Loranella is on throne bringing her kingdom back to its former glory.  While dangers remain, the queen is not willing to cower in fear.  She is working to establish a rule of fairness and believes that forgiveness is the only path for moving forward.

Each familiar and loyal team has been sent on a questabout to test their growing abilities and to strengthen their magical bond.  Skylar and Dalton have gone in search of the lost Xylem garden. Marianne and Gilbert have traveled to the Ocean Oracle to seek the ancient tome, Protocols of Divination.  And Aldwyn and Jack have been sent to the haunted Equitas Isles to find Aldwyn’s Maidenmere Cat twin, Yeardley.  Each returns pair returns, two successful, one not, just in time to celebrate the queen’s birthday.

Before they even have a chance to share the details of their quests, the celebrated three are thrown into their next life or death mission.  Skylar has created a beautiful necklace for the queen, a gift she would like the three friends to give her.  It is the first gift given – and the last.  Immediately the necklace sinks into the queen’s neck poisoning her and bringing her to near death.  The healers can only keep her from slipping into death for two or three days.  That is all the time the familiars have – they must escape the dungeons and find the antidote to stop the parasitic poison from killing their queen.  It seems that everywhere the friends go for help they are always a step behind.  What or whom they seek has been removed just as they approach.  Their final choice is to travel through the treacherous Land of Dreams to talk to the queen herself, find the antidote and clear their names.

Nothing is as it seems.  Dreams turn to nightmare.  Friends become would-be-killers. Reason is clouded by desperate fear.  But Skylar remains scholarly and resourceful, Gilbert, though transformed for a time, remains a true jokester, and Aldwyn continues to logically move from problem to problem determined to reclaim his right to belong and do good for those who depend on him.  This might be my favorite so far.  I can’t wait for the next though – I wonder what will happen when Aldwyn and Yeardley are reunited.

You can find out more about the Familiars series and its creators at their  website.  You can even discover what your familiar would be.  Have fun.