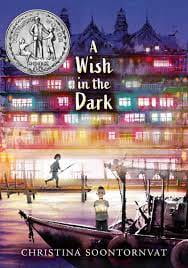 Wow!  What a wonderfully layered book.  I was breathless as read the last word and shut the cover, eager to read it again to catch what I’d missed the first time.  A real gift!

Once upon a time Chattana was full of magical wonders, but when catastrophe struck, that changed.  In the present magic exists, but is mostly invisible.  It is there, but tightly controlled.

The only light and power allowed in the city comes from  glowing orbs.  The citizens use these to light their homes, cook their meals and power their machines.  The orbs come in a spectrum of colors.  The dimmest and most affordable orbs are Violet and Blue.  The brightest and most dear are Jade and Gold.  The color of the light has become a symbol of wealth and status so the wealthy are bright and illuminated, while the poor are dim and shadowed. The city Chattana literally has a dark side and a light side – where you reside seems to define your position and worth.

The law of Chattana requires a child born in prison to remain there until his or her 13th year.  Pong, born and orphaned in Namwon prison, is nine.  He dreams of what his life will be like when he is finally able to enter the city.  Inspired by a poster in his classroom, Pong aspires to serve the Governor, Chattana’s savior, ruler and sole source of power.

When the Governor comes to inspect the prison, Pong he hopes he’ll make a favorable impression.   A misunderstanding by the Warden’s daughter,  Nok, makes that impossible.  In fact the Governor proclaims, “Light shines only on the worthy”  and adds that there is no worth to be found in anyone “born in darkness.”   These words crush Pong, and so when the opportunity for escape occurs, he takes it.

Out of the prison, Pong has to flee.  The tattoo on his wrist forever connects him prison, and if caught, he’ll be sent back, for life.  That would be unbearable and so Pong heads south to the sea.  When he is feeling most desperate, he stumbles upon a temple in a small town.  There he meets a wise and generous monk, Father Cham.  Father Cham teaches him about boundless compassion, staying true to yourself and looking for ways to lift others. At the temple, with Father Cham Pong learns and grows – his life is changed forever.

Four years after the prison visit, Nok is faced with a dilemma.  Her parents have asked her to leave the city to attend a well respected school run by monks in the country-side.  They feel it will be best for the family – Nok disagrees.  She has always tried to make her parents proud.  She is the best student and the best spire-fighter.  She believes if she can perform one more impressive feat, she will prove her worth to her family and to the elite.  She just has to realize what that feat will be.

When visiting the school, she discovers it.  Nok recognizes a young monk in the village as the boy who escaped from Namwon on the day of the visit that caused her father to lose his position.  She believes that if she can bring this fugitive to justice, no one will again question her worth.  Thus begins Nok’s relentless pursuit of Pong driving them both into the impoverished darker side of Chattana.  Their the rumblings of discontent and protests of the oppressed are stirring.  As they become louder and more intense, both Pong and Nok recognize the importance of empathy and compassion in the face of the blinding power of self-righteousness.  Will that understanding come soon enough to change the course of the future?  Will they survive?  Will Chattana?

A Wish in the Dark is masterful and magical. A must read book!